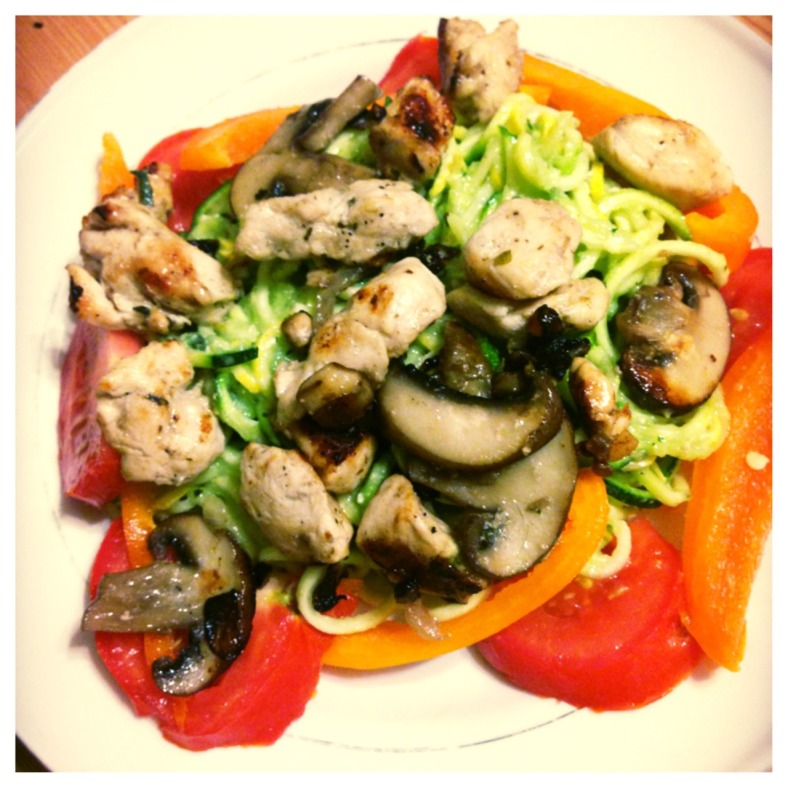 I found this awesome sauce (click on the picture for the recipe). The only thing I changed was adding in a small palm-ful-ish of cashews and a dash more lemon.

Step 1: I spiralized the awesome zucchini noodles (2 zucchinis, 2 yellow squashes – I had about one zucchini a person) and then sprinkled/mixed some sea salt on them while they hung out in a strainer on top of a plate. Note: This helps drain the excess water before you start eating/mixing so its not mushy.

Step 2: While my noodles were straining, I made the sauce – dumping all the ingredients in the magical device called the food processor.

Step 3: Once the sauce was made and just hanging out, I grabbed my frying pan and I tossed on some coconut oil to heat up (I kept this on medium-low). Once my coconut oil was hot, I tossed on about a quarter of an onion and giant cuts of mushroom.  While these were cooking up, I grabbed my chicken tender pieces and diced them up. Next, I seasoned my chicken breast pieces with salt, pepper, dried basil and a dash of savory. When the onion became fragrant/see-through I tossed on the chicken and kept stirring every-so-often until the chicken was done and browned (15 minutes-ish).

I mixed my noodles and sauce in a bowl. Then I started plating… zucchini noodles on the bottom, chicken(mushroom and onion on the top) and I garnished on the side with a few pieces of fresh tomato and orange pepper! #Finished.

Eat it all up – it’s hot, cold, fresh and filling!

Blogging about photography and other things

talking type 1 diabetes, one prick at a time

The latest news on WordPress.com and the WordPress community.